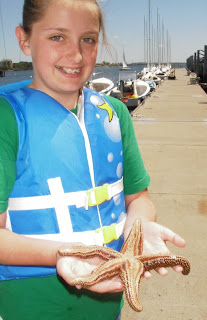 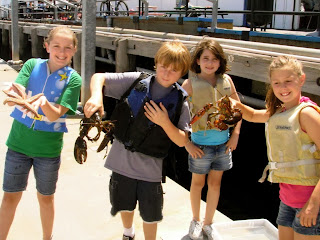 Hello everyone, hope you all had a good weekend. Today I started my second week working at Piers Park & CSC after a one week absence. We had a new group at Piers Park and I had fun getting to know them. As we waited for the sailors to leave from the dock, we played a quick game of sharks and minnows, but sadly I failed to get to base even once the whole time so I was stuck being a seaweed the whole time. So after the sailors left, we headed down to the docks where we got some fishing going. Even though we did not catch a fish, we all had lots of fun trying.

After finishing up a great morning at Piers Park, we took a boat ride to CSC. I enjoyed my first week working at CSC, but based on today, it seems week 2 is going to be even more fun. We pulled up a couple of lobster traps, on one of them we caught two red-rock crabs, and on the other we found two gigantic lobsters (ok maybe not that big, but big enough to eat). Tom said he would take the bigger one home for dinner, I do not know what will happen to the less gigantic one, maybe it will get lucky and be freed. We then got some fishing done but again, we could not catch any, but it was also still fun. Soon after that the call was made for sailing, and unfortunately only two Save The Harbor staffers were needed so I had to head back to the office to do some blogging (which is also lots of fun). That was the end of another great day at work, looking forward to an even better one tomorrow.