We Run A Tight Ship 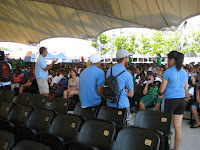 This is Conor, reporting that we have successfully finished our first week of the All Access Program. Since Tuesday, we have been bringing various youth groups and camps from around the city to the fascinating George's Island. Here, the kids were amazed by Fort Warren, which has stood since 1860. The dark tunnels and rooms of the fort were a big favorite, with the legendary ghost story of the Lady in Black providing an extra degree of excitement.

Meanwhile, others chose to roam the beach in an attempt to scout for various things. David told us to look to see if we could spot large pieces of (the very rare) blue sea glass scattered throughout the beach. Finding crabs was also an immensely popular activity, leading to no stone unturned. What we found was a multitude of Asian Shore Crabs hiding under these rocks. They are a destructive invasive species that has flourished in the Boston Harbor. The kids really enjoyed learning about this foreign species. I can't wait to see what adventures we will have next week!

Catch you on the flip side,