Come on, what are you afraid of? 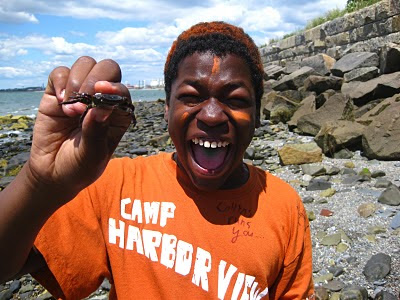 Certainly not a tiny, soft-shell Asian Shore Crab without claws! Getting Renee, a dedicated member of Save the Harbor/Save the Bay’s fishing club at Camp Harbor View, to pick up even this harmless crab took a week of coaxing and convincing. Once Renee held his first crab, however, there was no holding him back—later that same afternoon, he courageously clasped a Red Rock Crab, pincers and all!

Camp Harbor View is an invaluable asset to the City of Boston, and I’m proud to have been a part of its tight-knit community for the past two weeks. CHV brings together young people from all parts of Boston, from every imaginable background—everyone from Alejandro, a Cape Verdean whose uncle is a professional crab fisherman, to Renee, who had never seen a live crab before he peered into his first tidal pool at camp.

It’s only natural, therefore, that campers’ reactions to coastal wildlife vary widely. Renee, for instance, made it fairly clear that he was afraid of crabs—the fact that he jumped onto my back, screaming, when half a dozen Asian Shore Crabs scuttled out from under a rock hinted at his phobia. Renee overcame his fear, slowly and deliberately, over the course of the week he spent exploring Long Island’s rocky coast at low tide. By the last day of our session, he was confident enough to pick up the crab in this first picture—but not without a trace of his former terror!

Renee’s expression captures just some of the awe that we experience, campers and counselors alike, exploring the natural beauty along Camp Harbor View’s shores. I wish Renee, and every other camper I met during my weeks at Harbor View, many more inspiring wildlife interactions in the future!