Fun In the Tunnel! 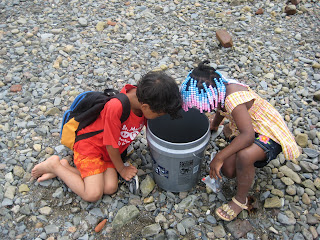 We went to George's Island today, with a bunch of kids. It was my first time on the island! I spent my time with David Coffin and Carolyn up in the wet tunnels, the kids were excited and afraid of the dark hallway. Both boys and girls spent there time shreaking as they entered the room in the middle of the path. Once in there it was pitch black except for a wole in the ceiling providing some sort of relief, but the older kids began moaning "Lady in Black!" Which was the name of a ghost that haunted the island in the Civil war. Older kids chuckled as everyone else screamed, and ran to each side of the tunnel. Going through the tunnel for the first time was really cool, but some little children were not up to walking through the tunnel. Once we began descending some kids decided to have a friendly race to a tree. Off they went running to the best of there ability. I was at the finish line when they came jetting through. After the sprint we all headed down to the beach where most were skipping rocks or playing with the crabs that they found previous to our arrival. When day ended the kids reluctantly returned to the boat. The boat putted back to where they arrived, and the kids went home with a smile on their face!