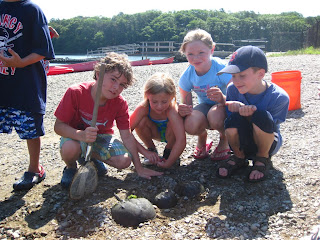 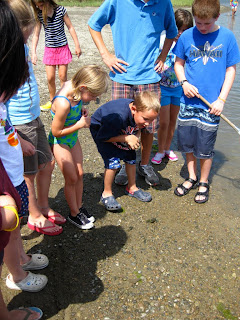 Yesterday at Blacks Creek, the day started out slow. Everyone was wading along the shore, looking for and finding plenty of periwinkle snails and hermit crabs. We were all waiting for the first big catch. It was not long before the green crabs started popping up. Of course it is always exciting to get some real crabs but everyone wanted more. We scoured the black mud along the shore for a new catch. Some even ventured into the further waters past all the sailors from the William Ryan Sailing center. After some steadfast searching someone stumbled upon a magnificent find, a horseshoe crab. We named it Phillip. Soon after another horseshoe crab was found, this one named Mrs. Phillip. After everyone got a good look at the crabs it was discovered that our assumptions about the crab couple were not as clever as we thought. We had named the bigger horseshoe crab Phillip, assuming that the male would be the larger of the two. Fortunately, this theory was dispelled by Aaron. The female horseshoe crab is generally larger than the male. We released Mr. and Mrs. Phillip back into the creek. We waved goodbye and this time called them by their proper names. After the bon voyage everyone went back to searching for more sea life. We ended the morning with a bang and staged several crab races. Killer and Bob were among the champions of the races.
-Alex
at 9:16 AM