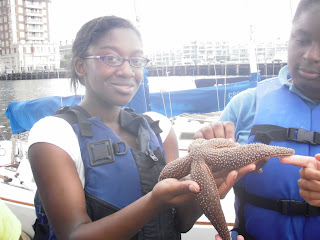 On Tuesday at Courageous, we pulled up a lobster trap expecting to find, well a lobster. However, to everyone's surprise, we found a flounder hanging around in the trap. How and why it got in there was anyone's guess, but the excitement on everyone's face was as clear as day. We also caught some crabs in the "lobster" trap, as well as a sea star and mussels; we seemed to catch everything in the lobster trap, except for the creature that it was designed to catch. Nevertheless, the kids enjoyed themselves. And even though we did not catch any fish with the fishing rods at courageous, the kids still had a blast trying.