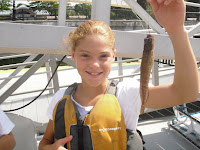 For those of you who don't know, there's been a little talk of a competition around the SH/SB water cooler. The competition you may ask? The quest to see who can catch and net the most fish. So far BJ and Tom have been mocking my fishing skills after they both caught numerous fish this past week. This malicious slander can finally be put to rest after we caught two fish yesterday. We are officially on the board after McKenzie in Eastie caught what we believe to be a Carolina Hake and a flounder was netted in our lobster pot at the Courageous Sailing Center in Charlestown.

McKenzie's angling brought great excitment to the whole Piers Park site. Using mussles as bait, she dropped the line on the quiet side of the dock and patiently waited. I was standing next to her as she reeled in the 7 inch fish with ease. After placing it in a bucket of water, we turned to the guidebook to figure out what time of fish this could be. One camper Ali stated that it was a type of Hake, which is a relative of the Cod. We came to the conclusion that it was a Carolina Hake because of its brown color and the pale splotches it had on its scales. It was a great catch by McKenzie and everyone is pumped to catch the next one.