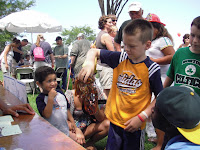 Last Saturday, I made my way to Lynn Beach for the first time for what turned out to be a really fun event. As we drove around the corner leading to the beach, my attention was immediately drawn to the massive sea wall. As I pulled up to the Red Rock Park, they were just beginning to set up for the Kid's Concert. Luckily we were there early so we had plenty of time to help set up our own equipment and some of their tables. When families started to show up, it was clear that the lobster in our touch tank was going to be a big hit. The kids really enjoyed touching and even picking up the lobster. Parents were excited and eager to snap pictures of their kids with a live lobster! For some of these kids, it was hopefully the first of many times they get to play with the marine life right from our own Boston Harbor. A few of the kids even got to take home some shells we had found right at Lynn Beach. Overall, it was a great event. The kids also really enjoyed the band that played. It was a very successful day.