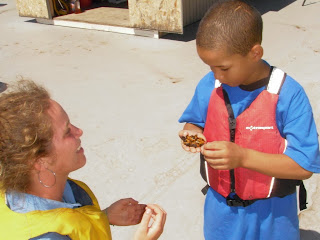 We finally caught a fish at Piers park, albeit it was not a very large one; but whatever, I'll take it!! On Tuesday, only Emily and I were staffing Piers Park as Tom was absent, but we did a great job and had lots of fun with the kids. We started the morning off with a quick game of sharks and minnows to get the kids excited and engaged. Once the sailors sailed off, we went down on the dock to catch some fish.
Things were moving slow at first as we failed to get even a nibble on any of our baits. A couple of the kids decided they would try their luck elsewhere and handed their rods over to the others who had not yet gotten their chance to fish. One of the boys, named jose, called me over to assist him. I took his rod and demonstrated how to cast (perfect cast), then I handed the rod over to him to give it a shot. Using everything I had thought him, Jose threw a near perfect cast. I patted him on the back and told him "well done". After just about a minute, Jose wheeled in his line, and at the end of it was...yes, a FISH!! Finally we had caught a fish, only the second one during my two weeks of working there, and the first one for Emily. It was a great scene as all the kids stopped what they were doing and rushed to see the fish. Unfortunately, it was not nearly large enough to keep so we had to release it. It was a great morning.
~Cesc
at 3:30 PM