That's not a crab! 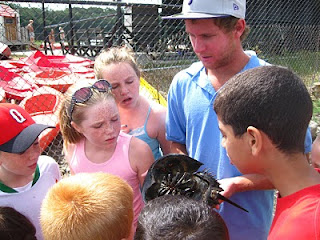 Last week Conor wrote about the prehistoric sea spider that our friend Sully found crawling through the mud at Black’s Creek in Quincy—take a look at these pictures, which give you a sense of just how strange horseshoe “crabs” are. Horseshoe crabs are so unusual to us today because they’re “living fossils,” a term that paleontologists use to describe animals that are very similar to their distant ancestors. The horseshoe crabs that we find today look the same as fossil horseshoe crabs from 445 million years ago! To put that into perspective, it took less than 6 million years for chimpanzees and humans to evolve into different species. During that same stretch of time, horseshoe crabs have hardly changed at all!

Why haven’t horseshoe crabs changed? Because they’re so good at what they do. Although they’re not really crabs, like the Green Crabs or Asian Shore Crabs we see more often, they do live on the ocean floor and feed primarily by scavenging. They’re protected by a thick shell, which covers their whole body, and their tail allows them to right themselves if they get flipped over. Horseshoe crabs are built like tanks, and they’re designed so well that they’ve had no reason to change.

The only threat that horseshoe crabs face comes from humans, who pollute their habitats and collect too many of them to use as bait and fertilizer. When colonists first arrived in New England, there were so many horseshoe crabs that farmers would literally use tons of them to fertilize their fields—nowadays, however, finding a horseshoe crab in Boston Harbor is a thrilling discovery. With continued dedication to cleaning up the Harbor, we can ensure that horseshoe crabs will still be around to give future generations of Bostonians a living lesson in ancient history.