The Infamous AABH on a MONDAY 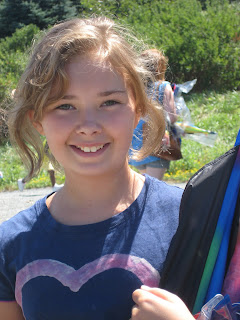 With the wind whipping on our faces, Cassie, David, BJ, Alizee, and I went on the trip out to Spectacle because the original day was canceled due to heavy rainstorms. In the lobster trap was a spider crab! The first group that came enjoyed themselves and became bold enough to hold it and scaring their fellow members. With groups coming in and listening to David talk about today's wonderful opportunities to do something that the groups had never done before, in a smart and safe way. Many crossed off this challenge by just stepping onto the island itself or even stepping onto the Virginia C-II.
After dispersing to renew our energy with our homemade lunches, and enjoying my cherries, Cassie and David went to the beach on the right with a couple of students to collect sea glass and pottery while BJ, Eliza, and I went to the top of the highest drumlin to fly kites. I met many kids who didn't feel like going up because they didn't want to hike up the hill, but one guy, named Eddie, pinkie promised me that he would go up the hill with his friends to fly kites; I had a great time trying to persuade them to get up and go with us!
On the summit, it was quite windy, sending many kites twisting and swerving everywhere. The kids who flew the kites were young, maybe even too young to hold onto the handles. The winds were fierce, and actually blew away a kite! I quickly ran to the tiny "bridge" because the handle got stuck on the railings. A park ranger got there ahead of me and gave me the handle. The string was all let out, and I spent nearly 20 minutes trying to ravel up the string, and untangle the kite from 2 trees. It was quite an adventure!
The next three days are going to be a blast!
Thi
at 10:27 PM