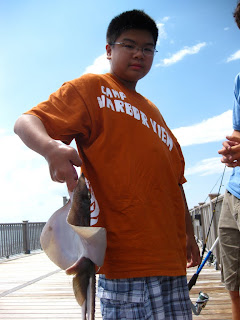 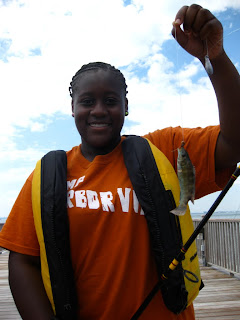 I woke up yesterday and looked out my window. All I saw was grey and white. Dark, ominous clouds hung over my head on my commute to Quincy. The whole train ride over I hoped for clearer skies and feared thunder and lightning. I was not worried about the dangers of the crash and roll of a thunderstorm but I was worried about what thunder would prevent us from doing. Luckily, no thunder or lightning came our way. We got rain instead. This would have thwarted most people from wading int the shallows of Blacks Creek but not us. After finding shelter for a little while we jumped right in. Some kids were scouring for hermit crabs and green crabs, while others fished for minnows off the dock. Soon enough the sun began to peek through the clouds, just in time for Camp Harbor View.

By the time we reached Long Island the sun was shining, a good omen for the rest of the day. And as fate would have it, nearly the very instant that the first hook was dropped in the water a fish was caught. First we caught a small cunner, blue and grey. A little while later the same camper caught another cunner. This one was red and orange, something I have never seen before. This hot streak continued until the afternoon at Camp Harbor View was over. By the end of the day we had caught 2 skates, 3 cunner and a sculpin