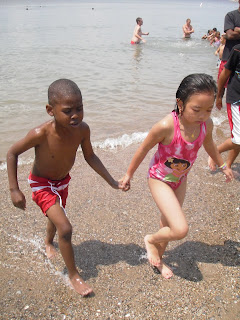 Today was even better than before, it was pretty hot at first but then after the boat ride I was alot calmer. I was mostly impressed with the free servings on the boat to spectacular.Since we were employed by Save the Harbor/Save the Bay I gotta say they took very good care of us. They were great and very entertaining people. Even the kids were wiling out after BJ doing his crazy dances and his insane jokes. David the most funniest man there bumped his head on the ceiling of the boat trying to pass by the goodies bar. I found it so funny because that's one guy that I always try to get revenge on, after David and Thi, whispering my name on the top of the boat while I was looking towards to water behind me thinking I was hearing a ghost. In my mind I'm like "No im not going crazy, just relax".Then I peep both of them on the top just laughing at me and I felt so dumb and slow. It was funny though but the kids loved all of us today, Me,Thi,BJ,Tim,Carolyn and David at Spectacular Island. BJ and I swam almost all the way to the ropes at the end of the water while kids cheering for us. While swimming back I was ahead of BJ and all you hear is young little girls like "Yeah that's what I'm talking about,Girl Power!"... But I gotta give it to BJ because with the kids support as well I was begged to get in the water completely. However I had alot of fun. The kids were asking about how to Blog, so I had to make sure they new exactly what to do so they could see their pictures and become part of us even though they are, but I was craving for them to be more connected to us. Then best of all I see two little cute love birds running out of the cold water holding hands and Tim is yelling at me "Take a picture of that" I missed it the first time but the second time they ran out of the water, I caught both of them together holding hands. It was the cutest thing ever. There were too many memories today, and I gotta stop writing or else Im never gonna stop.:-)