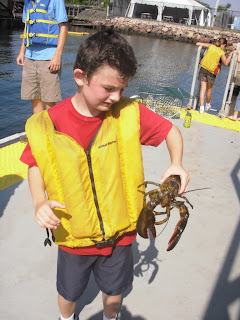 Hey it's LaToya, I spent my first week at Piers Park in East Boston. Yesterday we found a huge lobster in the lobster trap. It was the first time I got a close look at a lobster, and I picked it up. The claws were huge and one of the kids was scared to pick it up. Of course Paige, who was one of the most inquisitive kids that we had at Piers Park this week, was the first to pick it up. He was very excited and had a smile on his face. He was so curious to see what was in the lobster trap so I let him take it out the water. Paige was so amused and wanted to do everything in one second. When we were fishing, the kids wanted to learn how to use a fishing pole. They wanted to cast the line into the water and were hoping to catch a fish. Even though we did not catch anything, they were happy that they got to learn how to use a fishing pole. The whole week was a blast.
Peace of love
LaToya
at 3:43 PM