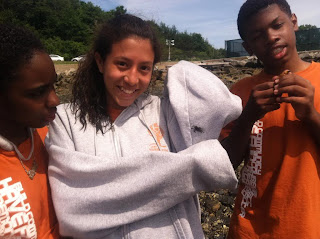 The cobbled beach at camp Harbor View is home to an interesting creature: the Asian shore crab. As its name suggests, it is an introduced species, originating in Asia and brought to North America in 1988.

Our mission today was to count, measure and determine the gender of all the crabs we could find on the beach in the rocky intertidal zone to help with a citizen science experiment led by Dr. Judy Pederson at MIT's Sea Grant.

We accomplished this by turning over cobbles and collecting all the crabs we found!

In an hour, we found 133 Asian shore crabs and 2 European green crabs on a 7 x 15 meter stretch of beach! Both of these species are non-native to Boston Harbor.

Our group had a discussion about introduced species in Boston Harbor, and the means by which these species arrive here. The young explorers were fascinated at the idea of young crabs traveling thousands of miles as planktonic larvae in the ballast water of large ships. Someone even suggested that people released their pet crabs!

All in all, the crab count was an interesting experiment!