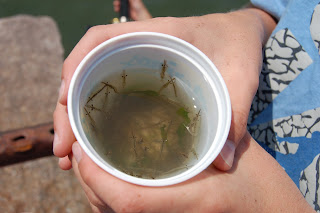 This week was a sentimental week for me at the McDonough Sailing Center: it is the last week where I am working there every afternoon. So, taking advantage of the final time that I had, I tried to do everything with the kids; crab counting, fishing, crab catching, water games, and anything else where the campers were able to have fun and learn at the same time.

This week was really cool by the lagoon since it was high tide, which re 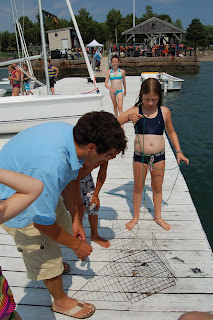 ally fascinated the campers. Although we could not perform a sufficient crab count due to
the high tide, we were able to explore the beach more and watch the water rushing into the lagoon from the ocean. The sound of the water rushing through the pillars under the bridge resembled the roaring of a tropical waterfall, and even though it did not offer such a stunning view such as a waterfall, it really caught the attention of the campers. They were wondering why water did this, why the tides got high some days and low others, how the ocean works, etc. I was really proud at their enthusiasm and their wanting to know so much. This little moment reflected all the time that I had spent at McDonough and the bonds that I formed with the people there. The first time I started working there the campers were extremely reluctant to even talk to me, and now at this moment they all trusted me with answering some of their biggest questions, or shared with me their dreams to be able to swim to Spectacle Island, or surf on the fast tide coming in. At that moment I was not a counselor to them, or a representative of Save the Harbor, or a boy from Quincy; I was just like another person from Southie; a neighbor they've known for years; a mentor; a teacher; a friend. 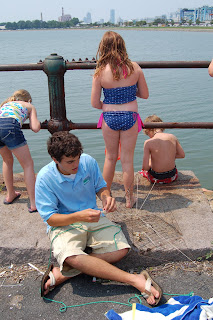 It is going to be difficult saying goodbye to McDonough. I know that I am not going to be away for the rest of the summer; I might come by here and there when needed. But it seems that I have just grown so used to seeing all those familiar faces eagerly waiting for me to start fishing and exploring with them; those familiar smells of the lagoon by the dockside or food from Sullie's; that long but tranquil walk from P Street to Castle Island. Once the campers found out that this might be my last week working full time at McDonough, they all reacted with dismay. But one camper stood out, because he said, "You promised me that you would stay if I stayed!" He remembered a "promise" I made with him that if he decided to stay in the program longer, since he was thinking about leaving, then I would stay with him. I did not know what to say; I was speechless.

So, thank you McDonough Sailing Center for a great time this summer. I hope the campers learned something from me, because I learned so much from them.