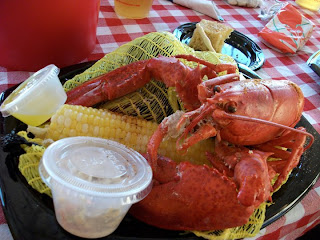 Being from California, I had never heard of a ‘clambake’ before, nor had I ever had lobster (I know, pity me!). But if that picture is any indication of how good that guy tasted, then you can be pretty sure I’ll be back for another one!

A few of us went out to Spectacle Island, where we were served delicacies of the New England type. Your regular lobster, clams, and mussels, along with some potatoes and corn. Then we passed the time by talking and watching the sunset fade behind the Boston skyline, as the skyline itself began to light up the night.

What a great way to wrap up my internship at Save the Harbor. Flying out from LA, I didn’t know exactly what to expect in terms of my duties and responsibilities, but I definitely didn’t expect to sail out to Spectacle Island to talk to kids about what they were learning so that I could go back and write up a relevant press release. Nor did I expect to do research on the history of Spectacle Island and help put together a “Treasures of Spectacle Island” pamphlet that would be used on the island as a resource to explain the abundance of sea glass and pottery, and other artifacts on the shore.

I learned a lot about what I might like to do (and not do!) over the course of the summer and from this internship. I know it will serve as a stepping stone for doing something worthwhile down the road. 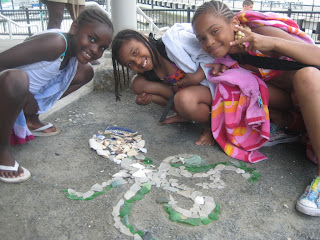 Thanks to everyone at Save the Harbor and I hope to see you all very soon!