River Monsters In The Charles? 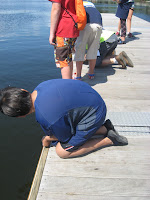 There was a sighting this afternoon from the banks of the River Charles; a massive fish swam by the our dock. The young anglers had so far only reeled in small sun fish, so the prospect of netting a massive fish was electrifying! The water was already littered with bobbing hooks but the fish swam past utterly detached. I would reckon that the fish most have been a few feet long, essentially making the other fish look as if they were mere minnows. I knew instantly that this would be a priceless trophy. I quickly grabbed one lad by the shoulder, whose rod lay limp on the dock. I urgently shouted at him to grab the fishing pole and give it some action. Obediently, the young camper yanked the line up and down, hoping that the monster would now be enticed. Minutes seemed to creep by like inch worms but then there was a lound shout. I instantly wiped my head around to see a rod bend violently downwards.

The leviathan had struck at last! We began to reel the line in desperately but alas our efforts were futile. Just as we seemed poised to pull the creature on the dock, the line sharply snapped and the beast tumbled back into the water. Was it a carp? Was it perhaps a pike? Was it some new type of sizable fish that lurks in the muck of the Charles? We'll never know untill we succeed in snagging this monster. Normally I would say that such a brute could only be seized by master angler Jeremy Wade himself but I feel that maybe in the near future, I could be holding up this prized fish for all to see.

From the Banks of the River Charles,