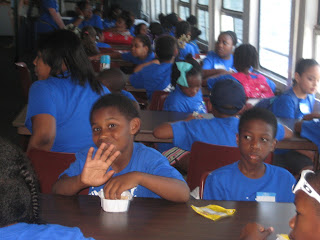 On my second week of work me and a few co-workers went out to Spectacle Island with the All Access boat crew. We took children from all over. We brought some children from Winthrop and some from the inner-city. Before we boarded the boat David asked the children some questions. The kids for the most part were excited as we were coloring and talking about what we were going to do on the island. Then we boarded the boat and got to have one on one time with the kids. The kids were excited about going on the beach for the most part.

When we arrived on Spectacle we looked for beach glass. Me and a few kids found several pieces of it then we talked about why we couldnt keep the glass and we had to put it back. Me and Josette walked several kids up to the top of the island. They were all happy with the view and the kids from Winthrop were really excited because they can see their community right from the top of the island. We learned several things that day. David taught us why the island is called Spectacle and we also learned how the island came to be. I had a really fun time and got to meet a lot of cool and interesting kids.