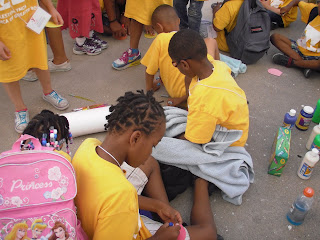 Friday was an awesome day with the kids. There were over four hundred kids at the beach that were having a great time. We had stations with different activities for them to do. I was at the Art station with Thi and Cassie. Thi drew pictures of animals that you would find in the harbor. She also made a Sponge Bob Square Pants theme. I sat down on the floor and started coloring with the kids. On the wall, there was a huge fish for everyone to put their names on. I gave the kids fish scales made out of paper, and told them to write their name and write something interesting that they loved.


At the other stations, there were children everywhere. Some were running around or playing games that they enjoyed. The big part of the day was when all the kids lined up along the shore of the beach and waited for the countdown to run into the water. When the final number was called, everyone ran into the water at the same time. It was amazing ! Everyone was having such a great time. I even had the chance to play with my coworkers. We started to play "Taps" in a huge circle. I would tap the ball to someone and always bump into Makhi. At this event, there was a lot of bonding and everyone interacted with one another.