Seeding Clams in the Boston Harbor!!!

As we boarded a boat in South Boston we did not know what was in store for us when we arrrived at our destination: Thompson Island. Excitement and slight apprehension was felt among passengers. The clean sea air and fresh salt water splashing against the boat as it sped along seemed to wash away the thoughts of doubt we may have. The question on everyone's mind was, how on earth does one DO a clam seeding? 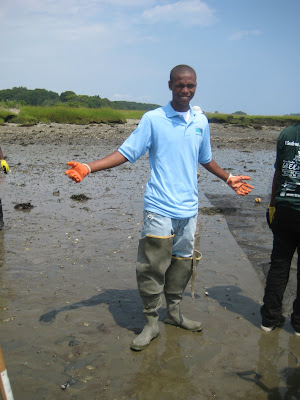 We were on a mission to seed clams on Thompson Island with a few of Mayor Menino's staff members and other volunteers to help with the efforts. Fortunately, when we arrived we were not the only first time clam seeders. We were taken across the island to where the beach that the clam seeding was going to occur. We arrived on site to see other large groups also waiting to help volunteer. WE filed into a large circle and counted off into nine groups that would each venture out to a different plot on the beach to seed clams. I was in group three. 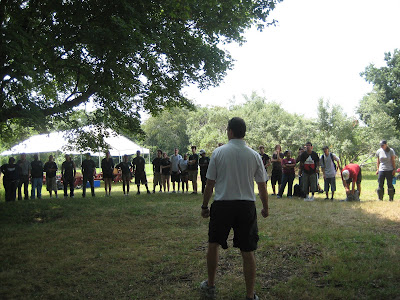 Group three was a very lively bunch and we all were pretty excited to help. Our group leader waled us towards the beach where a very large row of tall boots, gloves, rakes and shovels lay. As we found our correct sizes I was beginning to get a little worried why we may need such high boots and such large shovels. I tried to think back to the last time I helped my father with yard work and if this seeding may be a little more work than I expected. 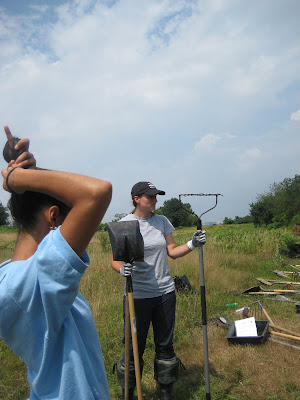 Now if you've never done a clam seeding, let me walk you through it:
First things first, you have to stake out a designated area with netting. This is so that the little clams have more of a chance of surviving with protection from predators as they grow and dig further into the sand. 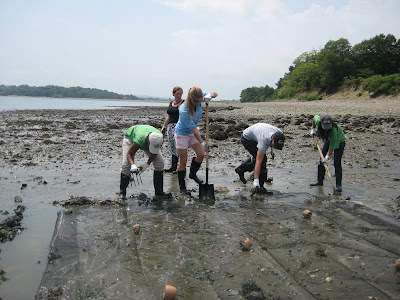 Next, a small moat is dug around the perimeter of the staked off area. This can get pretty messy and I am very happy we were provided with the boots and gloves. 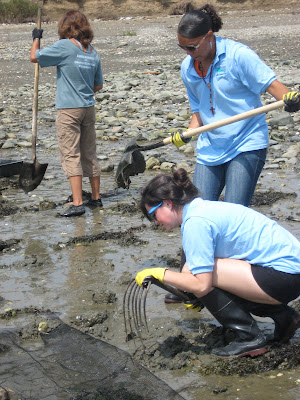 After the moat is dug, one side of the net is buried by filling in the moat over the edge of the net so that it is securely fastened under the wet sand. The netting is pulled back to expose the area where the clams are going to be seeded. The area is then raked to get rid of any large rocks or predators, such as crabs and snails, that may be hiding beneath the surface. This so that the little clams have a fighting chance of growing and reproducing. 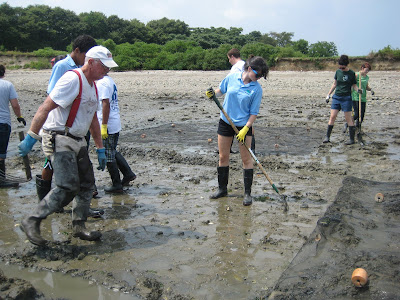 After the area has been raked, clams are disbursed relatively evenly throughout the area. These are very small clams about the size of your thumbnail. They will grow, reproduce and help restore the clam populations in the Harbor. 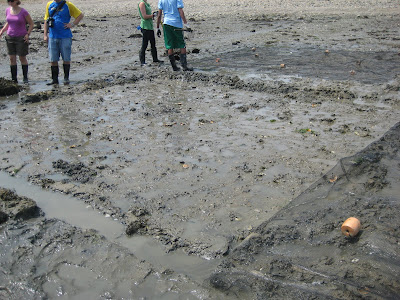 When the clams have been disbursed, the netting is pulled bakc over the area and the other three sides are buried by filling in the moats previously dug arround the perimeter over the edges of the metting. This is to protect the clams while they are still very small and vulnerable. Once the clams have matured and dug further into the sand, the nets will be removed. 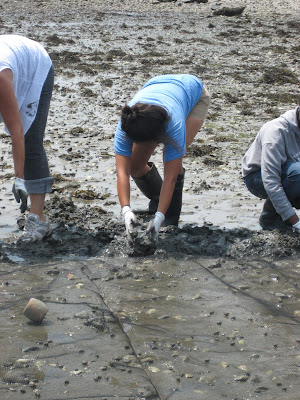 Congratulations! You have successfully done your first clam seeding! 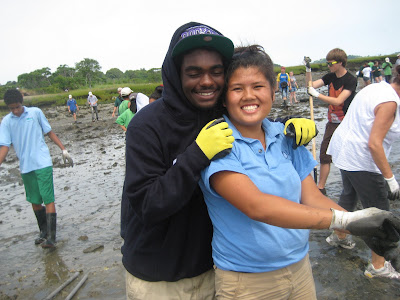 It was a great day to be on the Boston Harbor and an even greater day to know we helped make a difference for the generations to enjoy the wonderful place we already do. The softshell clam populations have been declining in recent years and our efforts are to restore these populations in the Harbor and help sustain future generations of clams in the Boston Harbor. To learn more about the project itself you can view the Shelfish Stock Enhancement Report on the Massachusetts Division of Marine Fisheries website.
A link to the report can be found below:
http://www.mass.gov/dfwele/dmf/programsandprojects/hubline/hubline_5yr_shellfish_stock_enhancement.pdf 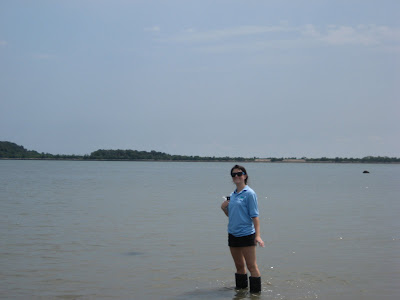 Thank you to all those who helped make this experience so rewarding and exciting. The Division of Marine Fisheries is doing a wonderful job in thier restoration efforts in this matter. A special thanks to Mayor Menino and his staff members who were able to take time out of thier busy week to come out and volunteer for the great city of Boston and the Harbor we all love!
-Sarah Appleton
at 12:41 PM