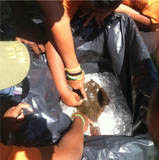 Joe feels a tug. He reels in the string and then something keeps tugging and swimming away. During my whole time working, I have not yet seen anyone catch a fish. I was so excited to be able to be there to see a twelve inch flounder. The flounder had many scales, and when we rubbed it a certain way it felt rough. I also helped Paula hold the flounder while she cut the head off. The fish could not stop moving before we killed it. When we put the fish down to measure it we knew we automatically needed to kill it because the hook was too deep in to get out. I felt horrible for the poor fish in pain but I knew we needed to do it since it was going to die either way. Franklin was the kid who got to keep the flounder and he even came up with a technique to cook it himself. I felt so proud of myself and I was not even the one who caught the fish.