I had to be the one with the muddy shoes 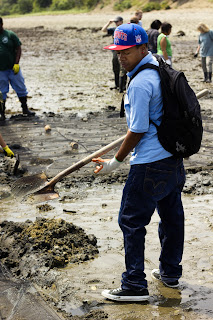 Last Monday we headed out to Thompson island to take part in the clam seeding process. When we arrived, we ate lunch and was split into groups so we can start to seed. I was in group 8 and as all the groups were being called to get their boots, we remained waiting. After about 10 mins of socializing within the group we were called to get our boots. We were also warned that there might not be enough. What do I mean there wasn't enough? I mean that I was so enthusiastic about clam seeding that I said forget the boots and just went into the mud in my low top chuck taylors. Now at first I was cool with it but eventually my feet started to sink and my socks got muddy. That's when I became the laughing stock/ mud model. My words to you; Don't EVER go clam seeding without boots, or you can end up worse than I did!