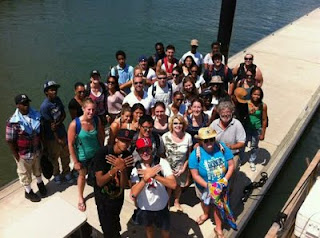 Taking this summer job was a great idea. Now I have experience working in the office from the six week internship I did this past April, along with experience outdoors. Having the chance to work with children from Boston was wonderful. As I taught them how to identify a female and male crab, the type of crab, etc. I was able to learn with them. A lot of what I did was new to me. It was my first time working, working with kids, fishing, crabbing and flying kites. The time has come, summer is coming to an end, but I will carry these memories forever.

I remember my first week I was at Piers Park. I grew close to as eight year old girl, Olivia. Olivia was teaching me how to speak Italian. :) Even though she only knows how to say fruit in Italian it was lots of fun. While I repeated the pronunciation of the fruit she spotted a wrapper floating in the Harbor. She screamed at me "Kristina go get the net, QUICK!" I quickly got the arancione "orange" net and handed it over to her, and she patiently waited for the plastic potato chip bag to float closer to the dock before she was able to have a safe scoop. I let her know if everyone was as aware and concerned about trash in the Harbor, it would be even cleaner. I told her imagine if everyone was able to scoop and grab a piece of trash they seen floating in the Harbor, and she said "I guess we need more people like me. People who care about their environment". Overall, Olivia and I learned something new. I learned some Italian and she learned that we need more concerned and caring people to help keep the Harbor clean.

This summer I caught my first fish. It was a 35" Strip Bass that won me two Red Sox tickets in the fishing competition. The fish was so heavy, until this day I can not believe I was the one who reeled in that large fish! I am so proud of myself. I love the fact that I was announced in the East Boston Times and that my

parents brag to his friends about it. This was by far one of the best memories this summer. I learned how to fish this summer and managed to catch one of the largest fish as my first. My mom has the newspaper article pinned up on her bulletin board at work for all her co-workers to see. It makes me feel good about myself every time this memory pops into mind. If I was to never accept this summer job I would have never learned how to fish and never would have caught one.

Staff day! That day was fun with my co-worker. I had the opportunity to learn about my co-workers. On the boat ride to Spectacle Island I learned along with others that Mehki takes his Mac with him.everywhere, or as Kassy says "His Jumbo IPOD!" haha. I learned how most of us had similar taste in music that later led to the discussion of an upcoming concert. Surprisingly the majority of us staffers are attending it! When we reached Spectacle Bruce and Patty, two amazing host, had prepared hot dogs on the grill. Of course Manny, Hughes and I were the first to create the line and ready to eat! :) We ate and socialized amongst each other and laughed at silly imitation Mekhi, Hughes, Manny and Vihn did. While some decided to play a game of capture the flag others hit the beach later on that day. I hit the beach and cooled myself off. It was such a relaxed day.It ended in a great way, a hula-hoop contest. Candido impressed us all with his hip movement and jumping skills that led him be the hula-hoop champion although Kassy was last to drop hers. Getting back to Boston I was happy with the tighter bonds I had built with some of my co-workers.

unnel two older women had snapped a photo of the tunnel. They both came out with a scary look as if they saw ghost.. Surely their camera captures white blots down the tunnel that seemed to actually be GHOST! I was freaked out. I could not believe this. I quickly pulled out my camera and snapped a bunch of photo of what seemed to be a never ending tunnel. My camera along with the other women's camera had caught the same image. Some people said it was the lens of the camera that was dirty; therefore, I cleaned it several times to still get the same picture. A bunch of blurry, white circles in scattered places in the tunnel.

The Clam Seeding was something different! My team and I had headed to Thompson Island. As we waited for the ferry Bruce took pictures of us. At first I thought the event was going to be cancelled due to the weather forecast, but the weather pulled through was okay for the day.I had no idea of what we were going to do, it was a surprise to me when I heard we were headed to Thompson Island. It was a surprise to all of us staff along with what we were up for at the island.Once we got there we were told we were going to do clam seeding. I was not prepared to do so because I had jeans on. Luckily, the staff at 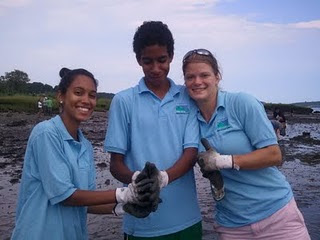 Thompson provided us, around 40 people, long rain boots and gloves. I tied my hair up, pulled up my boots up and put my gloves on. My group of eight headed out to the water, it was low tide. We placed a net on a muddy surface and began digging around the square net. After we did that we pulled the net back and began racking the surface removing Green Crabs we seen.We all grabbed clam seeds and carefully sprinkled them on the surface as the other eight groups did. We pulled the net over the seeds and put tons of mud on the edges of the net to told tight when the tide comes in. At the end of the seeding everyone was dirty! Some had squishy, dark , watery mud on their face, gloves, arms, pants and shirts.Before we knew it, it was time to bring our materials back and head back out to Boston. This was my first time clam seeding and I enjoyed myself. I hope I get the chance to do this again!

Overall, this has been the most memorable summer! A summer of learning, teaching, having fun and networking. It is a perfect way to end my summer and begin my new beginning in the fall for college in Schenectady, New York. :)