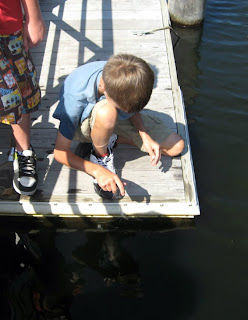 Yesterday's weather was awful, but despite the nasty weather
we still managed to catch some sunfish, catfish, and eels.

The most fascinating thing about yesterday was this spectacular girl
who had her own method for fishing.

It was so successful that she caught not 1, not 2 but 3 fish.

Her method was to drop her line in directly off the dock
and hold the line while laying on her stomach and look into the water
so she knew when the fish were coming.

To be honest I didn't think it would work but it did
and I regret doubting her method completely.