A Farewell to Spectacle Island

Last Friday's Beach Event Day in South Boston was amazing! I had a great time. It was so cool to see so many campers come together and just have a day of fun and relaxation, courtesy of Save the Harbor! I was mostly working on Sand Castles, which ended up with of bunch of campers and I digging to strike water (which we eventually did) and campers being buried up to their necks. And even though the stress level seemed to have gone up when lunch began, Save the Harbor did a great job working together; good job guys! 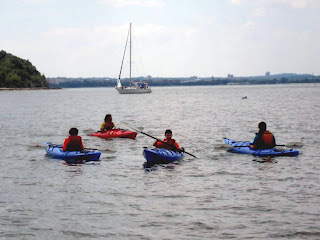 But, my main focus of this blog post was to say my farewells to Spectacle. Although I have only been there three times with Save the Harbor, all my visits granted me some new adventure. My first time was meeting new staff and seeing what the island was all about (by the way, that was my first time ever ON the island); my second time had me flying kite (not going to talk about it); and my final time, which was today, had me kayaking around the island! Thi and I, along with three other people from another group, went kayaking in a sort of informal tour around Spectacle Island. Although the harbor was really choppy, it was such an experience. I have only kayaked on rivers before, and to do it on theharbor for the first time, around such a beautiful island, truly was breathtaking. Later once we came back from All Access I realized what an awesome way that was to end my summer not only at Spectacle, but also at Save the Harbor. 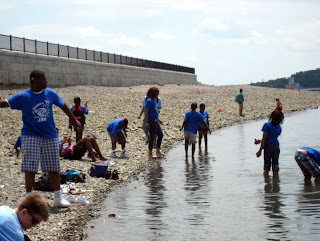 It's not my last blog post, but I still want to say thanks to all my fellow staff and the leaders and senior educators who made this experience for me an unforgettable one. I am going to miss all of you!