Some Ultimate Disc For An Ultimate Saturday 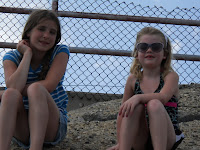 This Saturday, we found ourselves returning to the Curly Rec Center for the second day in a row. The event was the Summer Splash which was an open beach event for friends of the Harbor and was occurring just as swimmers from the Boston Harbor Light Race were crossing the finish line. Before we had a big old splash in the Boston Harbor to celebrate the South Boston beaches for having the cleanest urban beaches in America, we decided to organize a quick game of Ultimate Disc between members of the staff. Ultimate Disc is played with a Frisbee and is very much like a cross between basketball and football. You attempt to throw a pass into the touchdown zone without getting blocked or letting it touch the ground. Also, When in possession of the disc, the player must establish a pivot foot and remained rooted to the very spot. They then must pass the disc to one of their teammates before the opposing player covering them counts to ten "stalls". Michelle and I were the two captains who selected teams. My team worked extremely hard and there work paid off, we soundly crushed the our coworkers. Everyone preformed really well but I got to hand it to Leon with his game changing interceptions and Ahmed with his fantastic touchdowns. After the game we later ran into my buddy Paddy, a young sailor at The McDonough Sailing Center. He ended up playing toss with Tommy and I, where he was not ashamed to show off his Frisbee skills. Paddy started off the summer not knowing how to throw. But this year he has pretty much mastered all the throws. I was very impressed and hope that him and the other Southie kids keep up with the sport. South Boston could rival Amherst as the new hots spot for Youth Ultimate.
Take Care,