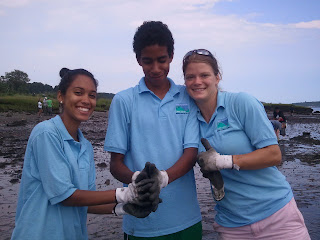 Today I got to experience my second field trip with Save the Harbor! Along with eight other Save the Harbor staff and various volunteer groups and individuals, I traveled by ferry to Thompson's Island to plant clams. A couple of the staff had been there before and knew much more about the island than I did. Originally, Thompson's Island was a farm school, later evolving into a farm and trade school, and eventually becoming Thompson's Academhy, a boarding school for boys. At the top of the island remain the brick sturctures built for the prep school, and are now used at dormitoriews for overnight camps and summer school programs that use the island. 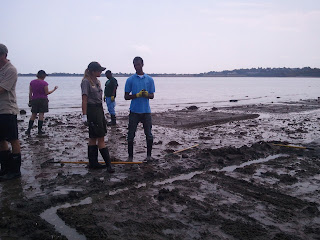 When we arrived, we were all brought to the "Family Fun Area" to sit, drink and eat, and get to know each other. We were then split up into 9 groups, each led by an Outward Bound summer student who was knowledgable in clam seeding. Every group was responsible for seeding one "net" area of clams. This required us to dig trenches, pull out crabs and worms, and pack in mud to keep the net in place. Thankfully, they provided us with boots. But Mark had a hard time getting his hip-boots off at the end of the day. 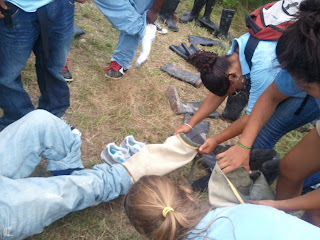 A professor from UMass Boston who helped to lead the project also explained the importance of water testing in the harbor and what we can do to make sure it stays clean and preoductive.
At the end of the day we were able to lounge on the grass and play Ladder Golf before the ferry arrived. It's so cool knowing that the clams eaten in Boston in the next year coul dbe ones that I planted! It was a wonderful first trip to Thompson's Island!