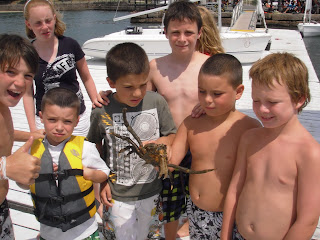 This afternoon in South Boston was exciting right from the start. As soon as we arrived on site, the kids were eager to pull up the lobster trap that was put out near the dock. We had baited it using the muscles taken from right beneath the dock. Muscles are a known favorite snack of the many sea creatures roaming the sea floor. So I was not surprised when the trap pulled up a ton of crabs. We were not lucky enough this time to catch a lobster, but the kids were thrilled with our haul! Among the many other crabs scattered throughout the trap, the prize catch was a massive spider crab. It was one of the biggest I have seen all season!
Spider crabs are really interesting for many reasons. They look very different from any of the other crabs we catch. Spider crabs are known for burrowing in the mud in order to hide from predators and catch unsuspecting prey. Because of this, they become encrusted with nasty mud and seaweed, adding to their creepy appearence. We did run into some difficulties trying to remove the spider crab from the trap. Somehow, the crab had gotten its long claw intwined in the netting. After some careful manuvering, making sure to be as safe as possible, I managed to safely free the crab without any harm to it (or myself!). Of course, the boys were eager to hold it and pose for a picture. After rebaiting the trap, we tossed it back into Pleasure Bay. Tomorrow maybe we will even catch a lobster!
Till Next Time,
Tommy Regan
at 4:42 PM