A Tuesday morning that started off kind of slow and ugly, from a weathers perspective at least, radically changed after gathering a small group of kids and throwing down the rubber bases... Creating a diamond gridiron for the ultimate, ultimate KICKBALL GAME! 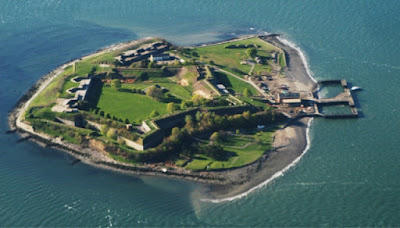 This week the all access crew heads to the beautiful Georges Island. As excited as I was to dock and have some fun with the kids, once the rain began to come down so did the kids in spirit. The rain smacked the windows of the Provincetown II ship and the kids began to get nervous about what was in store for the rest of the day.

Once we touched down at Georges Island  the kids and their staff ran off to a quite spot for lunch, meanwhile i ran up to the fort to set up sports.  We started off slow and kids were more excited  about going to the dark tunnel than doing anything else. Thats fine because once running out of there they walked acrossed the freshly cut grass and the diamond shaped kickball field. A game that started off focused on the kids having fun and smiling quickly turned into competition... Friendly competition at least. The kids played hard all the way through and once it was time to board thw boat at 1:45 they didn't want to leave. I told Andy "it's about the youngins', relax with the power"  soon the kids were all about competing lile we were playing for a national championship.