Never a Dull Moment at Carson

Carson beach is one of my favorite sites this year. Between constant soccer and kayaking, I just cant seem to get enough! This week at Carson was nothing different. We had an amazing game of soccer with the kids. It was staff vs. kids, but the kids seemed to put up a good fight. It was a close game, but in the end you know who came out on top; the staff. There were just too many of us and we are not any slouches on the field either. This kid in the picture, his father plays soccer and he said "You're the second best soccer player in the world, after my dad." That only made me want to win even more. I cannot lie, little man had some skills, I can see that soccer really does run in the family. 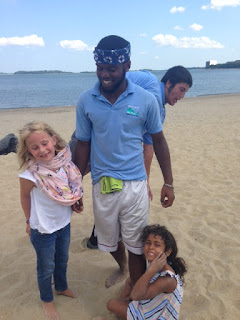 Throughout the summer, I have met many kids. Some of them like me more than others, but I also like the kids that I work with. They all have something different about them that makes them fun to be around. Meet Adalade and Emily. I think these are my two favorite campers of the week. Adalade (on the left) was one of the leading scorers for the children's team. She had about six goals and had no remorse for the staff members defense. Emily (on the right) was just a fun camper. Everywhere she went she was running around and bouncing everywhere. Every time she fell, she would do a cartwheel and get back up on her feet. She also attached herself to my leg for about 20 minutes. She said we were Siamese twins, and that we couldn't go anywhere without her. These two campers brought many smiles to my day at Carson. Until my next blog, Preston.
at 3:00 PM