Tuesday was my first time enjoying All Access! We took a trip to Peddocks Island where I enjoyed a hike round the island followed by a refreshing swim in the water. The ride out was entertaining, I approached three young girls around the age of seven and began asking them questions about the harbor. The responded by asking me twice as many follow up questions as I asked them. Soon their interest in the harbor was replaced by an interest in funny stories and talking about our dogs. Every so often they would ask me random questions like "Are there sharks here?" or "Am I going to get eaten by a whale?". The curiosity and easy distractions made me remember the field trips I would take with the Boys & Girls club when I was younger. 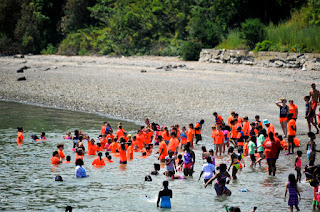 Wednesday I was at Carson Beach. When we thought our kids blew us off because of the heat, the Dorchester Y came through. They brought kids whom I played four square, taps, popcorn, and catch with. When they were swimming I went down to the water with them and was promptly splashed. After the kids left we took advantage of the free time and went kayaking. When we got tired we took a break, held on to each other's kayaks, and put our feet in the water. We regretted that later after we drifted out even further and had to paddle our way back. All in all it was a fun day and I can't wait to go back tomorrow! 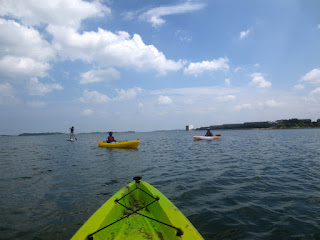 Until Next Time!
-Sam

Labels: Caraon Beach, Peddocks Island, samantha bowman, Save the Harbor / Save the Bay