We had a fruitful day fishing today at Camp Harborview. Two children successfully hooked a skate a piece within minutes of casting. For the two of them this was their first time fishing, let alone actually catching a fish. They were both very excited about their catches and did not want to release them back into the ocean. However, after explaining to them that skates are in fact not fish, but actually rays, they promptly liberated their trophies and began fishing for bigger game; something they could take and home and eat with their families. 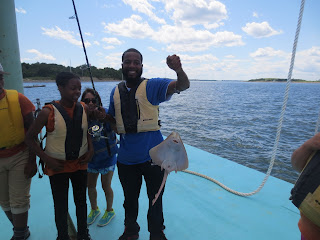 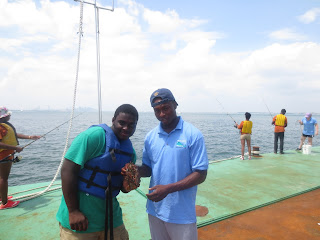 Also, today we caught a surplus of Red Rock Crabs in our crab traps. The kids gathered round and delighted in seeing the crabs crawling over one another. The campers were especially interested to see the legs missing from some of them, comparing them to starfish the way they are able to regenerate their limbs. A few children were reluctant to touch the crabs fearing that they would "pinch their fingers off." However, after a  quick demonstration of how and where to hold them, it wasn't long before the whole group was taking turns!