Little kids and lots of laughs.

So this week has been really really fun so far. On Monday we went over to Atlantic Wharf and did fish printing. It was so much fun we had a really big stripe bass, and two pretty decent sized flounders.  We did about twenty fish prints, each of them with their own design. 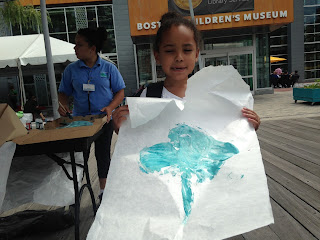 Tuesday was also awesome. I thought the second half of the day was the best. So during the second half I met a little boy who was two years old. He was so cute and apparently he really liked me because his mom was there, and she said he does things for people when he likes them. For instance he sung me his ABCs about five times and he sung me Happy Birthday twice. I thought it was so cute. It also made my day that I was able to make him laugh. So I took a baby crab and I put it in front of him and I made funny noises with it, and moved it around. He looked at me with the brightest and biggest smile, and he laughed. It was just so much fun. 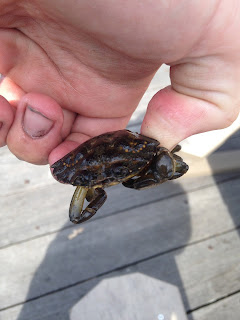 Then, at the end of the day, as we were packing up, I met a little boy and his sister. They were both so sweet. they were both arriving at the time we were cleaning up. I offered to let them each help toss the crabs in. Then, there were more kids around so we had to make it fair. It was sad because he felt like he didn't get enough turns so then we had one thing left: the FISH. I asked him if he wanted to help throw back the fish, and he said "yes". He was so happy. That's it for this blog. I cant wait to continue with the rest of this week and continue to enjoy each and every second of it. Other than that, enjoy your week, just as I will. Talk to you later!
at 8:37 AM