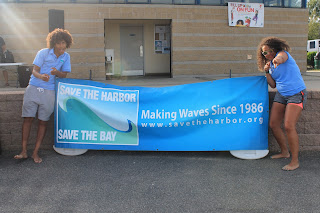 This past Thursday was the second Eastie Campfire of the summer and just like the first, it was a success! The DJ had everyone one dancing and laughing. Enzo, the Ranger had the campfire all set up and ready to go once everyone started showing up to roast their marshmallows, which were provided by the YMCA! Kids with sticky fingers and smiles filled Constitution Beach.

Unlike the last campfire, it was high tide. So searching for clams was not going to be an easy task. Instead, my co-workers and I decided to make some sand art as well as search through the sea grass that was a little ways down the beach. The kids loved drawing in the sand. We drew animals like the Moon Jellyfish and Green Crabs.

Once we were looking through the sea grass, I noticed that there was not just Periwinkles in there but also Hermit Crabs. This kids were thrilled and some were shocked that they were there. Just like I was taught as a kid, I told the kids if they sing to the Periwinkles, they will slowing come out of their shell. As always, the kids all start singing their own song. Excitement filled their little faces and looked at me like I had 3 heads because they were confused to why that it actually worked.

They were even more amazed at the Hermit Crabs that we found! Some were even scared to hold them because they thought they were going to pinch them. When I told them their claws are not like a lobster and other crabs they have seen, they got a little more comfortable with them but still told me they felt funny on their hands. Overall, the East Campfire was hit and is going to be getting better each time!

Till our next adventure,