Great end to a great week.

Hey everyone so this week has been a lot of fun, as always. First off, we caught several fish and lots of crabs. This week we caught a really cool purple crab. Yesterday was the best day of the entire week.

So yesterday I met a woman who only spoke Spanish. She also had two little boys who only spoke Spanish as well. It was so cool because I got to use my second language. It was a lot of fun. I got to teach them how to fish and what Save the Harbor does for the community, and all about our summer program, but in Spanish.

There was also another woman that day who only spoke Spanish, and she was from Colombia. She was visiting Boston with her son who was only five years old. I got to hang out and teach and enjoy speaking Spanish with two very nice families, which was great. On top of that, I was offered a tip for the second time this summer. I thought it was so kind and generous. When something like that happens you know your doing a good job and your making a difference.

Like I always say, this job is a lot of fun and its the kind of job where you can have new experiences and have fun. To end this blog I would just like to say have a great weekend everyone, and I look forward to the awesome event tomorrow morning. 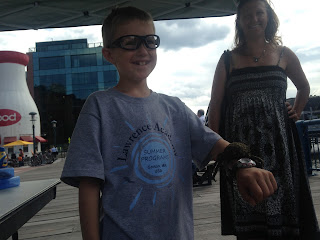