This past Thursday was perhaps the highlight of my amazing summer with Save the Harbor, the Fan Pier Fishing Tournament! 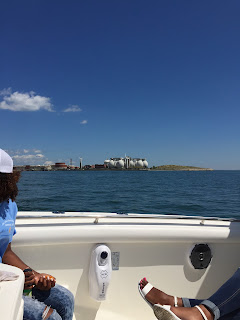 After a brief introduction and some friendly bantering from the fishing teams, we all shoved off and sped (hopefully) toward the stripers. We saw some beautiful sights along the way, like the massive Deer Island treatment facility from what Save the Harbor has made the tip of the spear of our harbor cleanup. We decided to make a pitstop to fish quickly next to Deer Island when we spotted a school of stripers jumping out of the water at a bait trail behind a barge. We found success quickly, landing a 25 inch striper which was unfortunately too small to keep, but it kept us in high spirits and hopefully would lead to a successful fishing trip. After the trail went dry we decided to track on down the harbor. 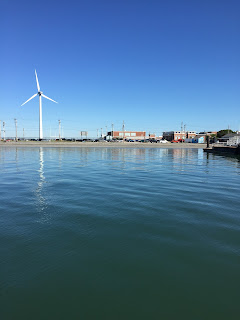 Our journey led us to the calm waters off the shore of Hull High School. We took in the surrounding sights of Peddocks island, the giant wind turbine that shadows the high school, and took some fishing tips from some of the locals fishing off the pier. Then we were back on our hunt for the stripers. After a few hours of only landing one more striper that was too small to keep, we returned to the dock. We may not have won any awards, we still held our heads high because catching any fish is better than not catching any at all!

When we returned to the dock, we were treated to a feast fit for a king... or at least a bunch of hungry fisherman. With boxes on top of boxes of delicious pizza, I was overwhelmed with such a beautiful sight. I only averted my eyes from such an amazing sight because I had noticed that former Bruin Shawn Thornton and Kiss 108's Billy Costa were now on the scene.

After getting an autograph and of course a photo of me "punching" him in the face, my day and possibly my summer had been made. Although he's not the biggest celebrity in the world he certainly has become a household name in Boston, and he hasn't let the fame go to his head. He was extremely down to earth and could not have been more approachable, for being one of the most intimidating people I have ever seen play a sport.


The day was capped off with Billy,  Shawn, and Mike Fallon taking a group picture with the prize winning fish, caught by our very own Danny O'Hara. After working tirelessly through the first three quarters of the summer, it was an amazing relief to spend a day relaxing on a boat and fishing. There aren't too many things better than that.