Fishing with Sam is Always a Blessing

These past couple of days has been great at Spectacle Island. Yes, the weather has been a little too hot but we still manage to make the best out of it to make sure the kids are actually out there on the harbor islands enjoying themselves. 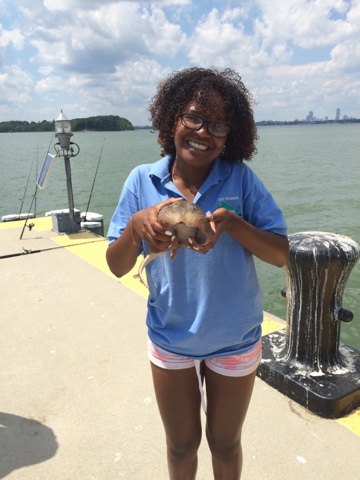 Fishing with Sam has always been the best and will always be the best. That's a fact! Sam came out with us on Tuesday and the number of groups and kids that came out with us was the smallest of all summer. We had only a few kids fishing. While the kids were there, we were catching nothing but crabs. We had a total of seven rods that day out on Spectacle. Sam castes three of them and left them out there until we get a bite so that the kids would have something to reel in. The other four rods were given to the kids to cast and try to catch something. At first we weren't catching anything at all and Sam goes "where are these skates?" A few moments later after the kids left, I decided to take one of the weakest rods that we have and just dropped the line down to the bottom of the ocean. Little do you know, I reeled in a skate from our weakest rod that had a broken reel and it was a lure rod as well. Sam was surprised because I caught a skate on a lure. 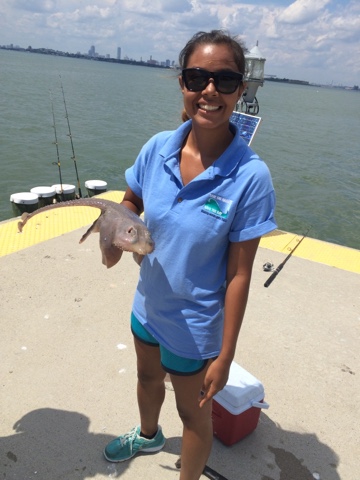 Jayda and the second skate of the day

Before we went for a swim, Jayda reeled in another skate! Isn't that amazing? I love when we catch all these skates because the kids always gets excited and they think it's a stingray. As Jayda, Sam and myself got ready for a quick swim at 1:30 PM, we decided to cast a few more rods. So when we got back from swimming, the three of us each decided to reel in one rod. Jayda reeled in further down to the left and I reeled in the one in the middle while Sam reeled in the one further to the right. After the two of them finished reeling in their rods, I was the only one left still trying to rail in one rod. I had no idea if I was reeling in another skate because it didn't feel that heavy so I thought it was a crab. Sam looks down and goes "Andrea, you're reeling in a skate and don't even tell me?" I was like, Sam it didn't feel like a skate at all. So guess what he says? "Here Andrea, let's leave it in the water and let one of the campers come reel it in so that they see that they caught something." I was okay with it. One camper from Lawrence came in and helped Sam reel it in!

This past Tuesday has been amazing. Three skates in one day? AWESOME! 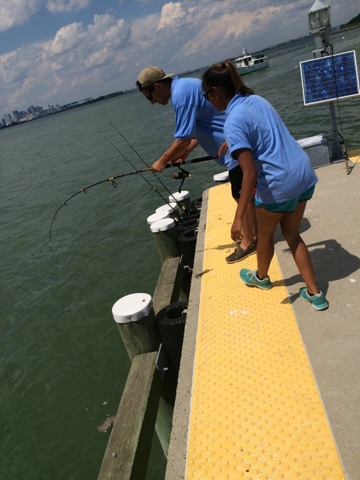