Hey hey hey, it's Flo again back with an update on the Save the Harbor, Save the Bay summer program. Today's blog is going to be less educational and more personal, so let's dive right in.

This week, I was stationed at a new site, Piers Park, where I interacted with some new faces of new coworkers. It was a pretty chill site where we had the opportunity to kayak, fish, and play games with the camp kids. We worked with kids ranging from ages six to eight and we kept them entertained with the activities we had to offer. Each day, the crazy kids would scream into our ears, expressing their need to switch games or to be the next group to go kayaking. It was a lot of chaos but nothing we couldn't handle.

And we all know how kids are, so they would often stop to ask random questions or exaggerate details of a story or an experience they had. But it all contributed to the fun times we had during the week. My highlight for two days out of the week was when the youngest JPA, Sebastien, fell in the water from attempting to get out of the kayak. We all laughed it off for the following days. All good vibes over here! 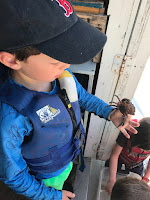 However, the biggest concept that I grasped from this week was the means of communication and coexisting. In the same week, I had to learn to alternate tones towards my peers and the kids, start conversations that would engage the kid and keep them entertained, and keep up an active mood to match everyone else's energy. I had quite an easy time fitting in with my Piers Park work group and connecting on various levels with them. I also learned that many people from all over have different stories that built up who they are today. And that impacted me positively because I came to realize that the diversity within every individual drives me to explore and understand them even more. And this is mostly because I have an interest in people's backgrounds, and I want to improve on my social skills. On the other hand, talking with the kids gave me flashbacks from my childhood when I would go to the park for a few hours and make a new friend. I mostly tried to make conversation about things kids enjoy doing: for example, playing games, their favorite interests. I mostly enjoyed playing the field games in the park with the kids because we all felt free and joined together to form one united family.

Within the last several weeks of working, one moment that I will never forget was from the first week of orientation when the whole Save the Harbor, Save the Bay group went on their first fishing trip. Bridget and Kristen were singing "Bo Diddley Bop" and "Haulaway Joe," and no one was in the mood. It was funny to me in that moment, but weeks later I was singing the same songs in an energetic mood.

That's all for now, I'll hook you in next week for a new update, 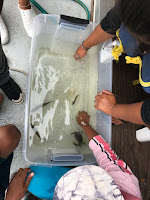