Four weeks have gone by already? Wow, time flies. During this week at Piers Park and Courageous, we did some new things. My team and I went finishing on the Belle last Tuesday with Courageous. We caught two spider crabs, one skate, and seven striped bass!! The looks on the kids' faces when they caught the fish had to be the best part. While at Piers, we’ve been doing mini educational lessons. We taught the children about how the moon affects the tide and how overfishing can lead to fishes going extinct, while keeping it fun and interactive! It’s always a great time when you can teach kids about something they find fascinating. 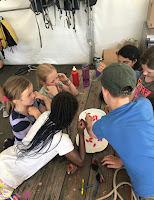 Also, I can’t forget about how much fun Monday was! Going kayaking on the Fort Point Channel and picking up trash had to be one of the most scary and fun things I have ever done! I was terrified at first because all I kept thinking about was the currents taking us out deep into the ocean and never returning back, but luckily that didn’t happen! Although my group and I didn’t pick up that much trash, it was good to see how clean it was after we were all done! There should be regular cleanups like this on all sides of the Harbor to not only make it the cleanest harbor in the country, but also look clean to the people within Boston.
Thanks to the Deer Island Sewage Treatment Plant and Spectacle Island being a trash dump, us Bostonians can be proud to say our harbor is one of the cleanest in the country! The Deer Island Sewage Treatment Plant was a $3.8 billion program created to protect the Boston Harbor against pollution from Boston’s sewer systems. The plant was operated by the Massachusetts Water Resources Authority in 1995 and became fully operational in 2000, and even since then, the Boston Harbor has been one of the cleanest harbors in the world! Before the treatment plant was put in place, everything that went into our toilets and sewers from Boston and Quincy ended up in the harbor! That led to the harbor being very dirty and smelly and even caused people to get tetanus shots after they went in. 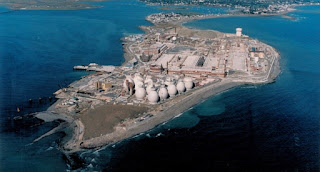 The Spectacle Island trash dump had to be one of the most interesting facts I have learned while on the job! Spectacle Island was on fire for 10 years... 10 YEARS!! A DECADE!! All the trash from both Boston and Quincy was put on Spectacle Island and was standing at 80 feet high! Do you know how high 80 feet is?? It’s HIGH. The trash was set on fire and burned over the course of 10 years and now some of the cool looking treasures in may find on the island is from the trash dump!
I can't wait to find out even more facts while on the job and creating ever-lasting memories! See you later!
- Fatima