A Solution for Pollution

Hey everyone, It's Aidan back at it again with another blog for my third week of work. This week was my first full week, and it was a busy and tiring, but fun, week. I got lots of sunburns in the blistering heat, and there was much to do, playing games with children and teaching them how to fish. I was excited to hear on Thursday I'd get to try J. Pace & Son's for the first time as a reward for winning the blog contest. Each week our supervisors pick a blog entry that stood out and my blog was chosen last week! Also on Thursday, one of the kids at Blacks Creek caught another horseshoe crab, and it was the same one from last week. We could tell because it had the same sea snail attached to its back. On Friday, I got to work with Kat's team at the Children's Museum. While there, the team and I caught lots of green crabs (rather feisty ones, I might add) and a small spider crab. 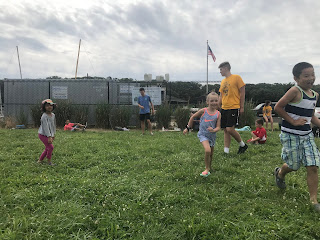 A fun game of everybody's it. 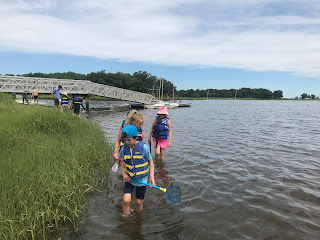 A couple of our camp kids trekking through the salt marsh.

Boston Harbor wouldn't be considered one of, if not the cleanest harbor in the U.S. if it didn't have some history behind it. The Boston Harbor was once the dirtiest harbor there was. Spectacle Island, for example, was once two burning hills of trash atop a sandbar, that made way for life to later prosper on the new grassy island. There is, however, still evidence of leftover trash on the island, like the sea glass that dots the beaches of spectacle that date back over one hundred years! Also, a few white pipes stick up from the hills, releasing methane gas from inside the hills on the island, where some leftover trash remains.
In the Harbor, flounder used to be rare, because they could never grow to full size, and the pollution caused tumors on the flounder's once white underside. Even though the herring gulls that populate the New England beaches often seem drawn to trash, they too die from ingesting or choking on plastic. Microplastics, like Styrofoam, are a big threat to the Boston Harbor, and to people who live or depend on it. The microplastics soak up other toxins in the water, like mercury, which is extremely toxic to people. These toxins, in the microplastics, are then ingested by marine life, which in turn may become food for humans, making us sick and causing serious health disorders.
In order to reduce the amount of plastic thrown in the ocean, it's a good idea to avoid single-use plastics like water bottles and plastic bags. An obvious approach to the problem is to be responsible for recycling plastics regularly, even if it's not your trash. Yeah, it is kind of gross to touch another man's trash, but you can always find a nearby bathroom to wash your hands or carry hand sanitizer around. If you want your friends or others to follow the same idea, let them know about the dangers or risks that they face. Show them facts about how the food they might eat could be toxic, or how plastic ingestion kills animals. The truth might seem scary, but it's for the right cause. You could also encourage the city to install more recycling cans on sidewalks or parks, so its not as tempting to throw trash wherever. This final one is kind of situational, but it doesn't hurt to apply a guilt factor to friends and family when they litter.