Hello, my name is Anthony Morgardo and I go to East Boston High School (EBHS). I live in Charlestown and I am a current member of a youth group in Charlestown called Turn It Around. On top of that I play trombone and was part of a music program Called Berkeley All Stars. Save the Harbor to me is a lot like Turn It Around and is why I wanted to join Save the Harbor. Now that I am part of  STH/STB, I have learned so much about the Harbor that I reside by. Let’s start with spectacle island. Spectacle island was an island that started of like a normal island. Life roamed free and was everywhere. Sadly, the island was dug out and became flat. The island then turned into a trash dump.   Once the island became full of trash, they burnt the trash to the ground. The fire burned for 10 years. Once it was out, Boston covered the island in dirt from the Big Dig. The island now stands as one of the tallest islands and it is once again full of life. More of what I’ve learned was the lives of marine life. Flounders, Spider crabs and Stripers were some of the things we caught while on a fishing trip. I had caught two flounders on that trip. The boat was small and there were a lot of us but we all could fit. Flounders were interesting since they were one of the many fish affected by the pollution of our harbor. In the past the flounders belly was brown and dirty when it should have been white. Luckily the flounders we caught looked pretty clean.
Now, out of the 3 days of orientation I can definitely say that Wednesday, was NOT the best day. Lots of paper work was handed out and although it was an important day, it wasn’t the best. The best day of orientation goes to the first day of orientation. The first day had perfect weather, and a great mood. It would have gone to the second day but it rained and was a little cold.
See ya later,
Anthony 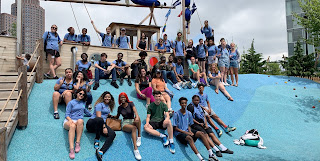