What’s OLD with the Harbor? 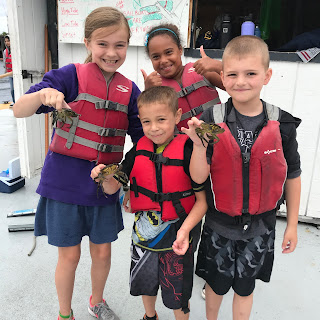 Yet another amazing week at Piers Park and Courageous Sailing. We did, however, switch it up just a little bit this week! On Tuesday we didn’t stay on shore—instead we were aboard the Belle. We were invited along with the campers of Courageous Sailing to board the Belle and go out and fish out on the Harbor. This was only such a fun experience! As we rode in the boat we got an amazing look at the Harbor. When we finally stopped the first time, the first group of kids helped bait the hooks. Then came the part where the kids dropped their lines into the water in hopes of getting a bite. On this trip some kids caught striped bass, skates, and even got to look at a lobster trap. I enjoyed watching how happy and interested they looked every step of the way. Then they even got to watch as ceviche was made—some tried it and seemed to really enjoy it. As the rest of the week went on we were back at Piers playing some fun games with the kids and once again fishing with them out on the dock. This week, however, it was a new group of kids, who were very excited to fish and play with the crabs in the touch tank. I truly enjoyed this week and can’t wait to have another amazing week.

As we all know, Save the Harbor Save the Bay has to do with helping people learn about the Harbor and help to keep the Harbor clean, so why not learn a little more about the Harbor? More specifically, more about the islands in the Harbor? The island of the day is... ding ding ding... George’s Island! I’m going to be fairly honest with you—this island gives me the creeps. Have you ever heard of the story of the lady in black? Well, if you haven’t, let me tell you. The story is about a woman whose husband was a Confederate soldier who had been imprisoned on Fort Warren (on Georges Island). This woman decided she would go and rescue her husband, and that she did. She was able to get into the cell and begin digging a tunnel to escape; however, one hard blow in the tunnel brought the attention to the soldiers in Fort Warren. She tried to fight them off but in the process dropped her pistol, shooting her husband and killing him. She was then sentenced to death by hanging. The woman’s last request was that she be clothed in women’s clothing: however, the only clothing they had were some black robes and that is what she was wearing when she got hanged. It is said that she forever haunts the grounds of Fort Warren. If you tell me you didn’t get chills after hearing that, we may have to get you checked by a doctor. However, other than scary stories, Georges Island has so much history! Besides being one of the Boston Harbor’s Islands, Georges was a place where Union soldiers trained for battle during the Civil War and Confederate soldiers were imprisoned. The first was decommissioned in 1947. Nowadays visitors visit the Fort, explore the tunnels, and parade the grounds. I’d just watch out for those tunnels though. I’ve heard that you can hear ghosts calling to you in hopes that one day they can bring you to their side. But overall the island is an amazing place to visit and explore and make fun memories with kids and adults alike.

You learn something new everyday! Can’t wait to continue learning about the Harbor with SHSB. Until next time :)