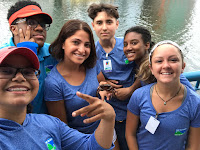 Heyyyy, I’m back again with a PSA about the Harbor and how it got to be how it is today. So for this week my crew and I were installed again at the Boston’s Children’s Museum where we explained to the public who were and allowed them to participate in fishing and a touch tank to get a feel of the marine life and how fun it is to be part of why it’s still striving. “Save the Harbor, Save the Bay” is there to serve as an educational outlet for people all over to learn about the harbor and everything that there is to know about it. We discuss how the harbor was an under water landfill for decades and once the problem became serious, the city invested 30 million dollars to clean it out and we, as Bostonians, must continue to keep the harbor safe from endangerment of becoming dirty again. For example, on Monday, the whole Save the Harbor, Save the Bay team went out on the Four Point Chanel to kayak and pick up trash in the water. My partners and I retrieved many plastic bottles, styrofoam cups, and containers. It was fun and all but sad to see the amount of trash we got as a whole and how there are ignorant people still after all this time.

Overall, the Harbor has been through soooo much in the past 50 years. From being featured in a song, to having a fire burn on its island for a decade and sewage plant treatments being installed at Deer Island to keep the water clear of filth. To elaborate, “Love that Dirty Water” by the Standells exaggerated the dirtiness of the harbor and how people could walk on top of it without getting their feet wet. That’s surprisingly unsettling to me because I can visualize the mindsets of people in 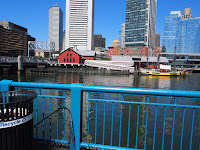 previous years through the harbors condition. Then, while the city was trying to clean out the harbor, huge dump trucks transferred trash onto spectacle island and lit it up on fire. FOR 10 WHOLE YEARS!! That is absolutely not ok. And finally, the city set up treatment plants for the water from sewage and that was probably the best idea they had yet. The harbor has suffered too much as an inanimate object and we need to start treating it with respect because it gives back soo much to the community.

And now that the Harbor is one of the cleanest harbor in the country, it is considered a national and state park because it is one of the largest recreational spaces and so it requires much attention and care. We should continue to keep the islands and water in gray condition for the years to come. For example, the Boston Children’s Museum restrooms have two settings for their toilets where a push up is for liquid waste while a pull down is for solid waster to keep the water cleaner through the sewage treatment plants. If more establishments around the water follow this idea, it can drastically 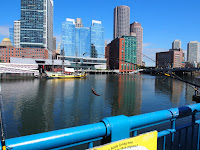 improve the quality of the water. And soon, this idea can branch out to other buildings and settlements.