I spent my third week at CHV and I loved it more than I did the last week; although I got whooped while playing against a camper in a game of chess (don't worry, I got him back). The staff held a lip sync battle for the kids to compete in and also had a cookout themed lunch! Throughout the week we caught a lot of crabs (some were pregnant), a striped bass, flounder,a few skates, and a baby lobster. On Monday we brought some kids down by the shore to look at the invasive species that were hiding under the rocks. One camper even brought his own fishing rod! 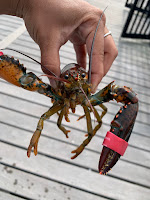 So far, I haven't seen extreme pollution, but it is still there. I have seen plastic water bottles, plastic bags, a tennis ball, and Frito/Dorito bags. Plastic pollution is a very serious problem that not many people seem to take seriously because they don't physically see it.  Marine animals, such as turtles and fish, eat micro-plastic by mistaking it for food. Large amounts of plastic consumption can cause marine animals to choke, sustain major injury, or die. Pharmaceuticals are also digested by filter feeders (oysters, plankton, etc.) which can cause them to have low reproductive rates and possibly die. Plastic pollution doesn't only affect marine life, it also affects humans too. Small plastic fibers can be found in 83% of tap water sinks in Metropolitan areas. Also, did you know that majority of the large water bottle distributors carry water bottles with plastic contamination in them? So you most likely have plastic germs floating around your stomach!

So unless you want baby plastic fibers ending up in your seltzers, please recycle your recyclables and throw away your trash in the correct bins. I know for a fact that I'm talking to ALL my friends and family about investing in reusable grocery bags, instead of paper or plastic. Paper bags are heavier and bulkier to deliver than plastic, so not only are you killing more trees, but you're putting more smoke into the air as well (fun fact, tell your parents).
See you next week!
-Stephanie