This week was fun and I adjusted very easily to the schedule. I spent my first week at Piers Park in East Boston. We did a lot of fishing and playing games with the kids. On Tuesday we went to another site called Courageous Sailing. I set up the crab traps and lifted it out of the water to keep checking if we caught anything in it. In the trap, I caught over twenty crabs between Tuesday and Wednesday. I also got to kayak with the kids, because they kept asking me to join them. We did not catch any fish that I remember. My coworkers and the kids mostly caught crabs while fishing. I didn't catch anything on the fishing rod.

I encountered a green crab on multiple occasions. The name of the species classification is actually Carcinus maenas. The typical size is a width of 90mm, but its size can vary between a bit bigger than a palm of a hand to smaller than a palm. It can be found in the Northeast Atlantic Ocean, Baltic Sea, around Australia, South America, and South Africa, or on both Atlantic and Pacific coasts of North America. The crab feeds on small crustaceans, worms, and varieties of mollusks. The crab's habitat will often contain mud, sand, rock substrates, such as in a marsh, and submerged aquatic vegetation.

A species I want to encounter is the Japanese spider crab--they're better than basic green crabs. They literally have long legs like spiders, which is where the name originates from. The crabs usually grow up to a size of 40 cm in width and can weigh up to 90 kilograms. They're mostly found off the southern coast of the Japanese island of Honshu. This spider crab is usually found in vents or holes deep down in the ocean. This species has a diet of fish, plants, aquatic crustaceans, dead animals (making them part-time scavengers), and carrion. I hope to be able to see one in real life some day!

I am excited to get a new group of kids at Piers and Courageous, and to get to bond with them, too. I also want to see if we can catch some more marine life. I'm also looking forward to creating lessons and playing games with the kids because it brings out both my competitive side and their competitive side, too. With this week coming up I also realized I need to start packing a lunch to stop spending my entire paycheck on daily lunches. This week will also be our first full week working, so I'm excited to challenge myself with working full time. This is where my commitment to the job will begin to show. 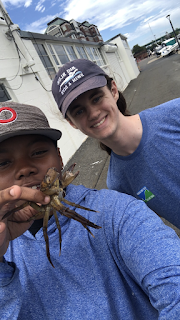