Diving into the First Week!

For our first official week, I began my adventure at Boston Children's Museum. We caught crabs using our crab traps and placed them in touch tanks for the kids to interact with. We also set up fishing poles to teach kids about fishing. Most of the kids caught crabs but one person even caught a fish! The next day and the rest of the week I was at Spectacle Island with All Access Harbor. I got to hear David's famous speech about the History of the Harbor and helped to hype up the crowd about the trip. For the first day, I was assigned fishing with kids. They caught many, many crabs, the touch tank was full of them! But, the biggest catch of that day was probably the little girl who caught a stripped bass (with the help of one of our team members). The next day, I spent up on the hill of Spectacle Island playing kick ball and other games with the kids.

The one species I encountered the most this week were European Green Crabs. Green Crabs are small, they only grow to about three inches wide. They originate from Europe, specifically Iceland and Norway and also Northern and Western Africa. They are very adaptable and can live in mud banks, rocky shores, sand and salt marshes. Green Crabs eat mussels, clams, snails, worms, and sometimes other crustaceans. They are one of the worst invasive creatures in the US. The species threaten other native crabs and clams.

The second species I encountered was the common Spider Crab. Although they can grow to be big, most spider crabs average about four inches. They can live in various locations including shallow waters to ocean floors near bays or harbors. Spider Crabs eat algae and detritus and sometimes starfish. The Spider Crabs are native to the United States and can be found from Canada to Mexico and in our own Boston Harbor. A fun fact about the crabs are their claws are very slow, so compared to the Green Crab, you have a less risk of getting pinched.

My Highlight of the week was definitely just being able to hold the crabs and getting over my initial fear but also help other children to get over their initial fears when they see the crabs. This week me and the children I interacted with learned to get over our fear of crabs. Next week, I'm excited to go swimming on Spectacle Island and hanging out with more amazing kids. 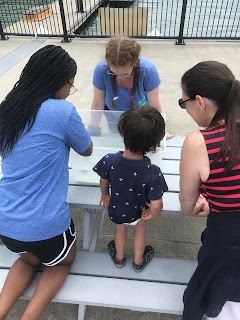 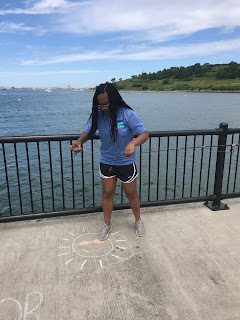 See you on the Harbor,
Tia