Lobsters found in Boston Harbor are not necessarily known for having beautiful vibrant colors, but genetic mutations, like with humans, can give some unexpected results. 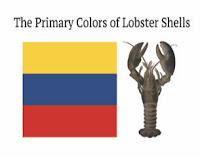 Lobsters have three layers of a chemical called astaxanthin located in the shells and is how their shells get color. The first layer is yellow, followed by blue and then a red layer composed of astaxanthin and other proteins. Because our eyes cannot see these individual layers, we perceive the lobsters to have a mottled brown color. When there are problems with the astaxanthin in a certain layer, it causes that layer to not be expressed which gives the lobster a distinct color. 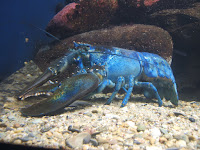 Increasing in our scale of rarity is the split lobster. They occur in 1 out of every 50 million lobsters and are a genetics curiosity. A split lobster is one that is male on one side of its body and female on the other. This mutation occurs in the embryonic stage when the embryo split into two different animals and thus creates the two separate lobsters.

Like with every animal, there is an albino version of lobsters. They are estimated to occur 1 in every 100 million lobsters. This can occur for one of two reasons. The first is that the lobsters lack all pigments in their shells, giving them their pale white color. The second reason is that they eat a diet lacking in astaxanthin which can make them turn white until they molt, showing their normal coloring. 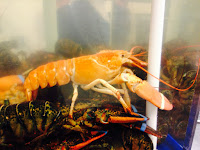 In addition to the colors blue, yellow, split and albino, lobsters have also been found in orange, calico, red (while alive) and cotton candy colors. As of right now, the cause of this mutation and if it is hereditary is still unknown, but scientists do know is that it happens during the developmental stage. According to Professor Emeritus of Biology at BU Dr. Jelle Atema, the coloring of lobsters does not impact their behavior. It is important that people keep expressing interest in lobsters so that we can learn more about what causes the rainbow of colors.
You can find out more about lobsters and crabs on our website at https://www.savetheharbor.org/s/Lobster_Crab-Fact-Sheets.pdf

See you on the Harbor!