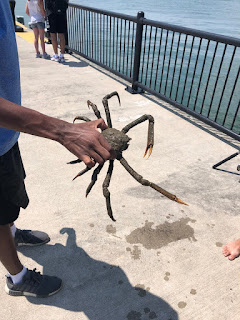 The first week of All Access Boston Harbor out on Spectacle Island was a blast! From swimming in the refreshingly salty ocean water with a beautiful view of the Boston skyline, to catching monstrous spider crabs, summer 2019 got off to a great start. It was incredible to watch kids as they embarked on their first ever fishing experience and enjoyed the thrill (or horror- see below) of catching crabs and a surreptitiously slimy skate! 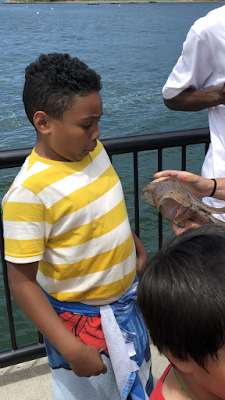 -Skates are cartilaginous fish that look very similar to their relative... the stingray. They are bottom dwellers that are particularly vulnerable to overfishing and gradual decimation due to their slow maturation process and low reproductive rates.

-Another inhabitant of the beautiful Boston Harbor is that of the Spider Crab, which I also found equally detestable in physical stature (most likely due to my fear of spiders themselves!) However, throughout the course of the week I gained an appreciation for them and even plucked up my courage to hold one. Granted, you might say it was on the smaller end as you can see in the picture of me holding it, nonetheless, it felt like I was holding the one pictured above! Fun Fact- Spider Crabs can live up to 100 years old! 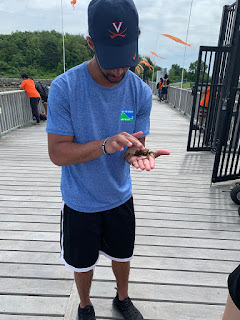 (I feel the same way as this kid when I look at skates!)


All in all it was a great week out ON and IN the harbor as swimming was a must during this wonderfully hot and sunny week. Shrieks of excitement and exclamatory laughter filled the air on Spectacle Island and the pier was filled with the hustle and bustle of kids and adults alike. It was an incredible experience to share both with the kids and my knowledgable fellow crew members who I have learned a ton from already. Looking forward to enjoying a great week two!