It's Alex reporting on a great week 4 for Save the Harbor! We kicked off the week with a staff enrichment day which consisted of kayaking on the harbor while collecting as much trash as possible. It was a beautiful day out on the water and we all had a blast getting to do some exploring while also taking strides to further improve our local ecosystem that has an inevitably significant influence on humans and marine life alike. The day allowed for everyone to reconnect and recharge and it certainly provided some much needed perspective in terms of the quality of our water sources and continuing the effort to Save the Harbor! 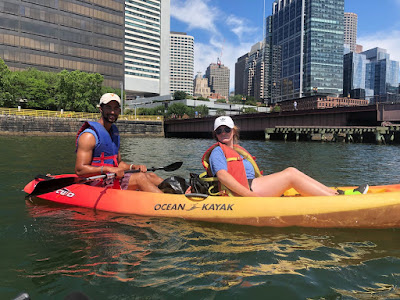 As we have learned the harbor used to be infested with trash of all sorts to the point that you could STAND all the way out on the water! That's how much trash was drifting around. Much of this trash found its way to Spectacle Island where it mounded over time and eventually was lit on fire, leaving a smoldering heap of garbage to burn for 10 years to come. I call to mind this repugnant, yet transformational story each day we go out to Spectacle to run our AABH programming and it is humbling to see how much improvement can be made over a relatively short period of time. However, I think it's also important to never let complacency seep in when evaluating the condition of the Boston Harbor and harbors worldwide as there is always work to be done when it comes to cleaning up our beautiful planet and all of its inhabitants! 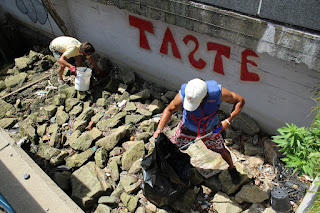 The responsibility to engage in environmental stewardship rests on all of our shoulders and I think the enrichment day overall really set the tone for the week out on Spectacle for the All-Access crew.

The highlight for me was our massive kick ball game out in the meadow which quickly turned into a full length soccer game where I was taught the rules by a few passionate kids, eager to tell me that maybe I should stick to throwing around the football instead after seeing my subpar footwork and kicking mechanics! Fishing was also a success where we caught skates which still freak me out, in addition to a multitude of different crabs, the spider crab being my absolute favorite/most despised....I still can't decide.

Next week we will be at George's so you can find me out on the field, in the tunnels, or fishing on the pier!